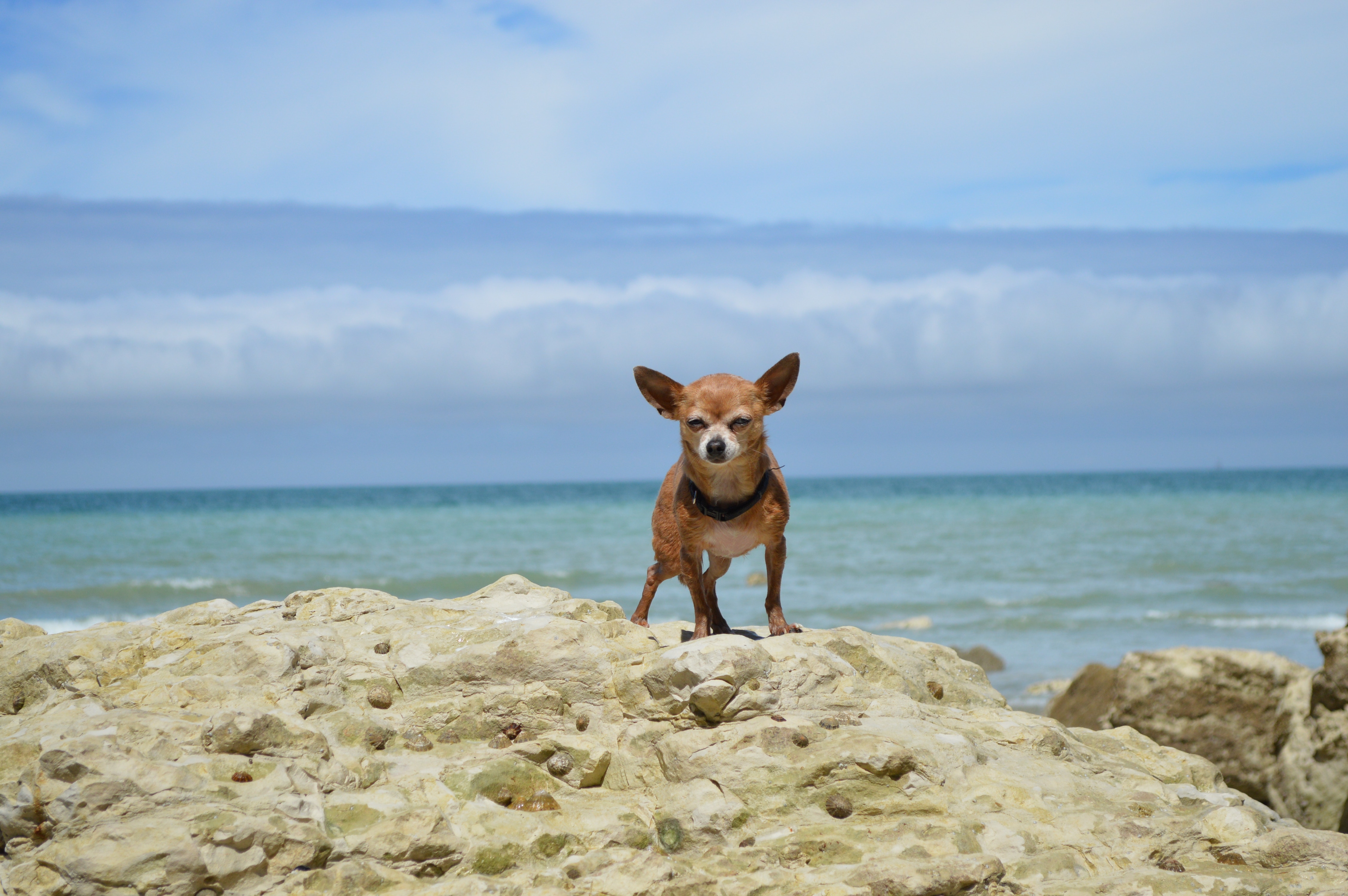 The gestation period of a Chihuahua lasts about 58-63 days after mating. You can tell whether or not a Chihuahua is pregnant by a blood test after 2 weeks or by other methods. The only way to find out early in the pregnancy is by an ultrasound examination. An ultrasound examination is done by a veterinarian no sooner than on the 21st day, since only then it’s possible to detect heart activity of the fetus. However, an examination this early is not a hundred percent accurate. If you want an ultrasound examination done, I recommend doing it around the 35th to 40th day, since then you can actually see the puppies. At this time, you can see them clearly and the heart activity is completely detectable. The doctor can even tell you the amount of puppies your dog is carrying, although this doesn’t have to be accurate. The puppies may be overlapping and blocking the view, so it’s possible you’ll end up having more puppies. Another way to determine the exact amount of puppies is by a radiographic examination, which should be done after the 40th day of pregnancy.

It’s good to know if the female dog will have one or more puppies. If she is carrying only one, there’s a bigger possibility that it will be big, and therefore there may be complications during the birth. A C-section is possibility in this case. The more puppies the dog is carrying, the smaller they will be and the easier the birth will be.

From a breeder’s experience, it’s possible to tell if you have a pregnant chihuahua in the first fourteen days of her pregnancy. This is because her behavior changes – she becomes calmer and cuddlier. The change is very noticeable.

We shouldn’t make any changes to the diet of a pregnant chihuahua. We shouldn’t give her any additional vitamins or minerals, especially not calcium. This could make the puppies bigger and stronger and therefore the birth more complicated for the mother.

If you didn’t get to deworm the female dog before mating, then you can do so after she gets pregnant and even 2 weeks before the expected date of birth. Deworming is very important, because without it the puppies could be born with unwanted parasites. If you’re going to be deworming a pregnant chihuahua, don’t use „Drontal“ – it has a teratogenic effect. Apply only tested products for pregnant chihuahuas.

Give you pregnant chihuahua some rest, but also enough exercise.  She shouldn’t get lazy in her bed. A walk can help strengthen her muscles and the puppies will move around some, which will make the birth easier. Don’t underestimate the importance of exercise and encourage her in being active.

If your pregnant chihuahua starts bleeding, contact the closest veterinarian, preferably one that can do an ultrasound examination to see if everything is all right. In very extraordinary situations, complications can start even a few days before the expected date of birth (a possibility of death of the fetuses).

While your Chihuahua is pregnant, especially in the second half of her pregnancy (when her stomach is getting bigger), massage her back and back legs. You can also massage your female of male dog outside of pregnancy. They all love it!

The termination of a chihuahua pregnancy.

If your Chihuahua gets accidentally pregnant, it’s possible to terminate this pregnancy. Only a veterinarian can do this by injection hormones. The injection usually happens 5., 7. and 9th day after mating. Be sure to talk to your doctor about the risks and negative effects of this termination. Carefully consider these before deciding if your pregnant Chihuahua will undergo this procedure!

The procedure basically causes the dog to be in heat, so that your Chihuahua is fertile again and can get pregnant. A pregnancy termination can cause bleeding and pyometra. Pyometra is a medical term used for when a womb is filled with unwanted effusion. The content of the uterus is usually not infected and contains dead tissue. The body of a Chihuahua absorbs the content and can slowly poison itself.

The symptoms of a poisoning are: dullness, fatigue, enlargement of the stomach and brown discharge. Emptying the uterus with drugs or washes is usually unsuccessful and a surgery that removes the uterus is necessary. Other diseases of the uterus associated with an increased uterine gland functions can result in more frequent and prolonged heat.

You should always consider if you want your Chihuahua to undergo this. I recommend making such conditions in which unwanted pregnancy doesn’t happen.

If you’re thinking about neutering your female dog, its best to do so after your dog is in heat (3-4 weeks). If you have a pregnant chihuahua, this will terminate her pregnancy.