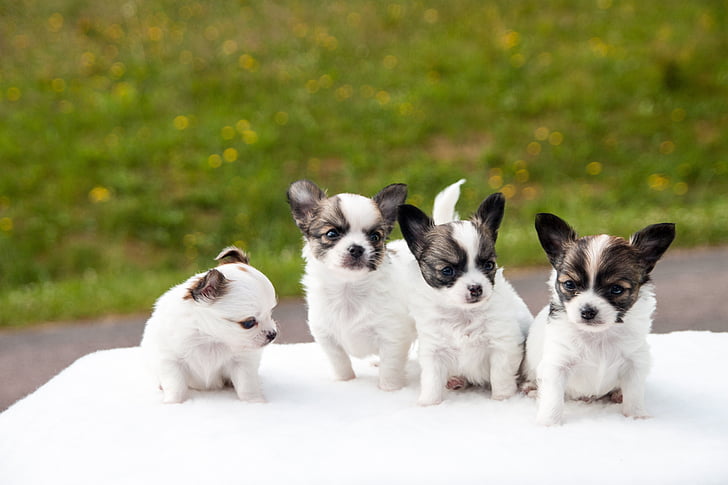 If your Chihuahua has at least 2 kg/4.4lbs, then she reached what is considered the appropriate min. weight for breeding. A Chihuahua that weighs less than 2 kg could have problems during birth and her life could even be endangered. If you still have doubts about breeding, consult your veterinarian. Sometimes, a Chihuahua can have 2 kg, but her pelvic area can be narrower (observable by the naked eye) which could mean a difficult or dangerous birth.

At what age should a chihuahua start breeding?

Definitely not during your chihuahuas first heat. The soonest is at the second heat, but only if your Chihuahua is mature and strong enough. I recommend breeding during the third heat, which is around 1,5 to 2 years.

How to select a chihuahua for breeding?

If you don’t have one of your own, you will probably look for one in your immediate vicinity. You can ask your veterinarian if he knows someone or you can try to look up Internet ads. When selecting dog, check his weight. The male dog shouldn’t weigh more than the female, rather the opposite. It’s also important to see if the dog has typical features to a Chihuahua (the head, ears, tail, body composition).  If a breeder tries to convince you that his dog is very fertile and that he fathered many puppies with different female dogs, don’t believe him. The female decides that, not the dog. It depends on how many eggs mature during a cycle. If you have a female Chihuahua with papers, you will probably be looking for a male Chihuahua with papers. If your female doesn’t have papers, you can still breed her with a male with papers. You will surely get Chihuahua features. However, I did meet one breeder, who would refuse to offer his male with papers to a female without papers. I think that’s a little over the top – it’s not like its going to hurt the male Chihuahua. Some more rare coatings are a popular breeding type such as brindle chihuahuas.

The next step is to find a good time to mate your chihuahuas dogs.

A good way to find out is when the female starts standing to be mated. This means she stands and thrusts her tail aside. If the female is not yet ready to mate, she will not let a dog near her and will probably growl at him. In that case, you should wait another day or two. It’s not possible to say which exact day is best for breeding. Someone breeds the 12th and 14th (when they repeat the process) day, others the 15th and 17th day.

Is it important to repeat the mating process?

No. It’s just to be sure that if it doesn’t work out the first time around, it will on the second try. But 95% of the first tries are successful!

When it comes to dog mating, don’t be surprised at the how long it takes! It could take from 15 minutes up to an hour! The female firmly grips the enlarged penis, and doesn’t let go until she has to. After insertion it looks as though they are standing beside each other, bottoms together. They may even be walking a little during it. Don’t ever try to force them away from each other after some time. You can internally hurt them, especially your female dog. I once heard that some breeders try to separate the dogs by pouring water on them. I think that’s terrible. I don’t do that!